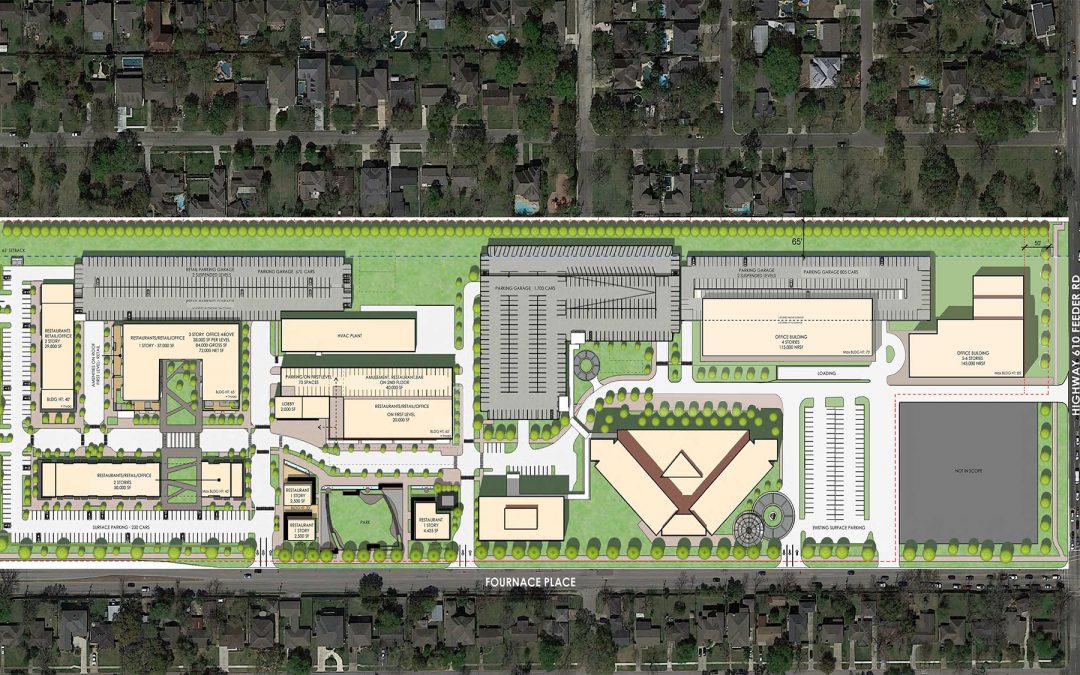 A long-awaited mixed-use development in the city of Bellaire is moving ahead after receiving approval from city officials. However, Bellaire Place, as the project is known, will not include several proposed elements that were nixed by city regulators.

Earlier this month, the Bellaire City Council approved a request by Danny Sheena, founder of Houston-based SLS Properties, to build the first buildings on a 30-acre tract at 4800 Fournace Place, just west of Interstate 610.

The project he has envisioned was modeled after high-end mixed-use developments like CityCentre and the River Oaks District.

“We think it’s going to be a great development that becomes a nice asset for the city of Bellaire,” Sheena said. “It is going to bring great walkability, greenspaces and an upscale element to an already great area.”

The first phase of development will include about 75,000 square feet of restaurant/retail space. That stage of the project will also include space for entertainment venues. Under the zoning plan approved by the city, he can have a movie theater, for example, if it is tied to an amusement space that also includes things like a bowling alley or something similar.

Sheena said the next phase of the project will include about 50,000 square feet of additional retail space, as well as Class A office space.

In all, Sheena said that when the first and second phases are complete — and if he moves ahead with two planned office buildings — the total size of this portion of the project would offer about 250,000 square feet of rentable space, sitting on about 12.75 acres.

The initial phases of the project will also include a park to provide additional walkability.

“While the entire zoning plan was approved, we have to stay below 70% of the overall construction before we can go back for additional approvals,” Sheena said. “We should be able to do the first and second phases without hitting the 70% mark.”

Sheena said he has tapped Houston-based Midway to oversee leasing for the project. Kirksey Architecture, which is also based in Houston, has been tapped to design the project. Sheena said he is still in the process of hiring a general contractor.

The final phase of the project would include even more retail and office space, Sheena said.

What the project will not include is a multifamily component, which Sheena said was the biggest sticking point with Bellaire officials.

Sheena had hoped to build a six-story, 300-unit apartment complex on top of a two-level parking garage, as well as a separate six-level parking garage capable of holding 455 cars. However, that aspect of the project was rejected by Bellaire officials.

The project will also have to adhere to strict height restrictions.

Having branded itself as “The City of Homes,” Bellaire is highly wary of becoming over developed, which explains why Sheena’s planning and zoning process took nearly three years to reach a conclusion.

When Sheena acquired the property from California-based Chevron (NYSE: CVX) in 2018, it was zoned for technical research, which bars mixed-use development.

Sheena was also seeking amendments that would allow the project to exceed standard height limits and for construction of a movie theater and an athletic club on the property.

During a 2019 presentation before the Bellaire Planning and Zoning Commission, several residents expressed concerns about increased crime and traffic, obscured sight lines and lower property values.

However, Andy Robinson, another Bellaire resident who addressed the commission at the time, said the kind of development Sheena proposed was long overdue in the sleepy town.

“Right now, when people think of Bellaire, they think of it as a city that floods a lot,” Robinson said in 2019. “I think this project would create new options, add value and be good for the city.”